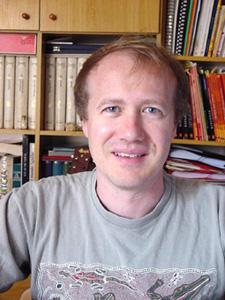 Jordi de Manuel i Barrabín (Barcelona, 1962) teaches Natural Sciences and is also a writer who combines literature with teaching and research. He is a member of the SCCFF (Catalan Society of Fantasy and Science Fiction).

He has published stories and novels for children and adolescents, among them, El pes de la por (The Weight of Fear, 1998, with Sílvia Vega), El somni de la nena bruna (The Brown Girl’s Dream), which was awarded the City of Eivissa Prize for Children’s Literature in 2000, De tots colors (Of All Colours, 2001), Els ulls d’Abdeslam (Abdeslam’s Eyes, 2001), Set de llops (Seven Wolf Stories, 2003), and El beuratge (The Potion, 2003).

He has also written novels and stories for adults, including Tres somnis blaus (Three Blue Dreams), which received the 2000 Valldaura Prize, Cels taronges (Orange Skies) which was awarded the Ciutat de Mollerussa Prize in 2001, Cabells porpres (Purple Hair), winner of the 2002 Pere Calders Prize for Catalan Literature, Pantera negra (Black Panther), winner of the 2004 Sant Just Desvern Fiction Prize for Prose under the pseudonym Joan Gols, and Calcs (Borrowings), winner of the 2005 Manuel de Pedrolo Science Fiction Prize. His collection of stories entitled Disseccions (Dissections, 2001), was awarded the Odissea Readers’ Prize, the only literary award with a jury consisting of one hundred readers.

He has also published a number of research articles on biology, along with numerous papers on innovation and teaching in the Natural Sciences. He has participated in teams that have been awarded, for their contributions to Science teaching, the 1992 Barcanova Prize for Innovation in Teaching, the 1996 Enciclopèdia Catalana Prize for Research and Innovation in Teaching and the 1998 Eudald Maideu Prize.