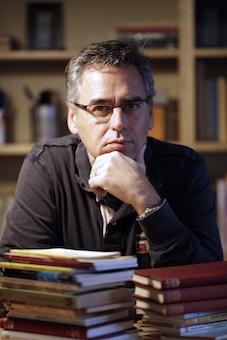 Jordi Galceran (Barcelona, 1964) is a playwright.

He studied Catalan Philology at the University of Barcelona and, in 1995, won the Born Prize for Theatre with his play Paraules encadenades, for which he was also awarded the 1997 Serra d'Or Critics’ Prize. Also in 1995, his play Dakota won the Ignasi Iglésias Prize of the Theatre Institute of the Barcelona Provincial Government. He has also written the plays Surf and Fuita, which were premiered in 1998. His play El mètode Grönholm (The Grönholm Method, 2003) was a great success, both in Catalonia and internationally, with audiences totalling an estimated two million people in sixty countries. Together with Esteve Miralles and Albert Guinovart, Jordi Galceran has also written the musicals Gaudí (2002) and Paradís (2005). These two works were awarded the Butaca Prize for the Best Musical in 2003 and 2005 respectively. His other titles include Carnaval (premiered in 2006), Cancun (2008), Burundanga (2012), Conversaciones con mamá (2014) and Polònia (2014). Another recent work, El crèdit, was first performed in 2012 and published (labutxaca) in 2014.

Jordi Galceran has also translated and adapted for the stage more than twenty works. Besides writing plays, he has authored scripts for several Televisió de Catalunya series, including Nissaga de poder, El cor de la ciutat, Laura, and La memòria dels Cargols, as well as writing the screenplays for four television films. Moreover, he authored the screenplay for the terror film Fragile (2005), which is directed by Jaume Balagueró.