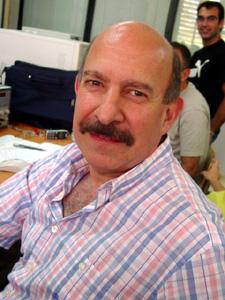 Josep Guia i Marín (Valencia, 1947) is an essayist, maths teacher and political activist. He has been detained, fined and tried on several occasions for his ideas and activities in favour of Catalan independence. As a leader of PSAN (National Liberation Socialist Party) he has worked intensively for Catalan language and culture and has been awarded several prizes for this work, for example the Jaume I Foundation Prize for Catalan Civic Activity, which he received in 1986.

He is also noted for his work on the medieval literature of Valencia, for his studies in phraseological analysis and of books such as Tirant lo Blanc. Outstanding examples of his work in this field are the books De Martorell a Corella. Descobrint l'autor del Tirant lo Blanc (From Martorell to Corella. Discovering the Author of Tirant lo Blanc, 1996) and Els primers reculls de proverbis Catalans (Early Collections of Catalan Proverbs), which was awarded the 1996 Valeri Serra i Boldú Prize.

He still continues with his civic engagement, while also working on literary studies and mathematical theory and teaching in the Department of Algebra at the University of Valencia. He is also president of the Electoral Board.