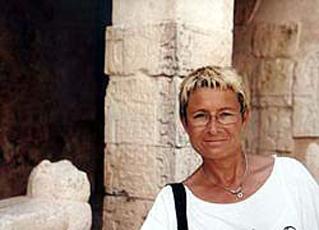 Glòria Llobet (Barcelona, 1956) made her fictional debut with books expressly written for young people. She received the 1992 Vila de l'Eliana Prize for her Què t'angoixa, Núria? (What’s Up With You, Núria?) and the 1993 Enric Valor Prize for Young People's Writing with Malgrat la boira (Despite the Fog). In just a few years she wrote a wide range of novels for this age group, all in an agile and vivacious language that young people appreciate. In recent years, she has turned to writing adult fiction and has been awarded inter alia the 1998 Ciutat de Mollerussa Prize for the Short Novel with Els ulls del mirall (The Mirror's Eyes), the 1999 Joanot Martorell Prize for El cor de les pedres (The Heart of Stones) and the 2001 Enric Valor Prize for the Novel with Connecta't, Sílvia (Get Connected, Sílvia).