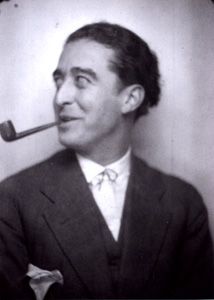 Francesc Trabal (Sabadell, 1899 - Santiago de Chile, 1957) was a novelist, journalist and humorist with a deep commitment to his generation and his country. He founded the Sabadell Group with which he initiated the publishing house La Mirada where he published a book of illustrated jokes L'any que ve (Next Year) with a Prologue by Josep Carner. The newspaper El Diari de Sabadell was one of the platforms for the Group's many activities in the sphere of cultural promotion. Francesc Trabal wrote a daily column for this publication for many years. He moved to establish the Novelists Club which finally became the Agrupació d'Escriptors Catalans which was a key element in the Catalan cultural landscape and predecessor of today's Institució de les Lletres Catalanes (Institution of Catalan Letters). He presided over this group's commission and was also its secretary. With the Spanish Civil War he went into exile in Chile where he created the Chilean-Catalan Institute for Culture while also engaging in different publishing initiatives. He is the author of the novels Judita and Vals (Waltz) (this latter book obtaining the 1936 Joan Crexells Prize), in which, as in the rest of this work, he deals with the unsatisfactory nature of human relations in well-to-do society, with a sense of humour associated with the vanguard tradition in tending towards the absurd.