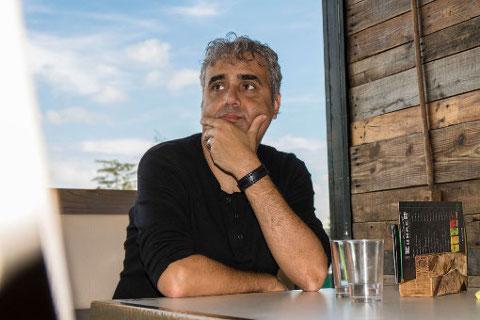 Joan Francesc Dalmau (Miralcamp, 1968) showed his artistic inclinations when he was very young and began his career in the world of song. Poetry and lyrics writing are forms of expression that permit him to ??reflect his ideas and experiences in a direct and accessible form of art and he soon realised that they were the ideal artistic vehicles for satisfying his need to express himself.

In 2000 he was awarded the Les Talúries Prize for his collection of poems Només respiren (They Only Breathe). However, since then, he has published several fiction books, including Per darrere i a les fosques (From Behind and in the Dark, 2001), a collection of irreverently humorous stories, Ni viu ni mort (Neither Dead Nor Alive), a detective novel in an existentialist setting and winner of the 2003 Mn. Romà Comamala Prize, and La pell dels altres (The Skin of Others), winner of the 2006 Ramon Roca Boncompte Prize. In 2009 he was awarded the theatre prize La Carrova with the play El retrovisor, which was published in 2011. In 2016 he published his second collection of poems, La malícia dels mots. He has also studied scriptwriting.