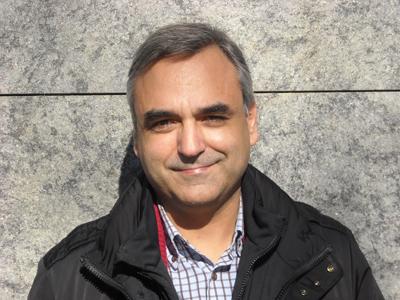 Vicenç Llorca (Barcelona, 1965) has a degree in Philosophy and Letters (Philology) from the Autonomous University of Barcelona, where he also obtained his Teacher's Degree in Catalan Philology. A professor of Catalan Language and Literature and a specialist in universal literature, and literature and cinema, he has mainly written in the genres of poetry, essay and non-fiction.

Among the essays he has published are the studies Màrius Sampere. Assaig de revisió del realisme històric (Màrius Sampere: Essay in Revision of Historical Realism, 1989), Salvar-se en la paraula. Introducció a la novel·lística de Miquel Àngel Riera (Saving Oneself in the Word: Introduction to the Novels of Miquel Àngel Riera, 1995); and an essay dealing with metaphor and sense at the turn of the century, L'entusiasme reflexiu (Reflexive Enthusiasm, 1997). He also contributed with other writers to the collection of Catalan literature Panorama de la literatura catalana (Panorama of Catalan Literature, 1998) and to the guide Literatura universal (Universal Literature, 1999), which was subsequently revised in 2008. He is author, too, of the biographical essay for children Petita història de Josep Maria de Sagarra (Little Story of Josep Maria de Sagarra, 1994), which is illustrated by Pilarín Bayés while, in the domain of art, he has published Història dels ulls. La pintura de J.M. Puigmartí (A History of Eyes: The Painting of J. M. Puigmartí, 1996) and, with photographs by Toni Catany, Enric Monjo. La realitat de l'escultura (Enric Monjo: The Reality of Sculpture, 2006).

In the field of creative prose, he is author of the fictional work En absència de l'àngel (In the Absence of the Angel, 2000), and of a portrait of Catalonia on the basis of a selection of its squares, in the illustrated work Places de Catalunya (Squares of Catalonia, 2003), with photographs by Domi Mora.

In 2011 he made his debut as a novelist with Tot el soroll del món (All the Noise in the World – Columna Edicions).

He has also translated into Catalan works by Carson McCullers, Bernardo Atxaga and Jean Cocteau. His own books have been translated into several languages including Spanish, Galician, English, French, Italian, Hungarian, Russian and Chinese. Llorca has published opinion pieces and literary criticism in newspapers and reviews and also takes part in cultural programmes on the radio.

Finally, in recent years, Vicenç Llorca has given many lectures and presented a great number of books, while also participating actively as a cultural manager in a range of cultural initiatives. Between 1991 and 1996 he was Secretary-General of the Association of Catalan Language Writers, and he has represented Catalan literature at the European Writers' Council, of which he was a board member between 1994 and 1996.

He was Associate Professor (2001 – 2004) at the International University of Catalonia, where he lectured on cultural institutions and cultural policy in the Masters Programme on Cultural Management. In 2003 he was nominated Honorary Member of the Associació Professional de Gestors Culturals de Catalunya (Professional Association of Cultural Managers of Catalonia).

He has been a senior teacher in Catalan Language and Literature in secondary schools and, since 2005, has been teaching curses in Catalan Literature and Universal Literature at the Col·legi de Doctors i Llicenciats de Catalunya (School of Doctors and Graduates of Catalonia), while also working as artistic director of different festivals such as the Sant Cugat Poetry Festival (2005) and the Night of Poetry and Music in Alella (2006).