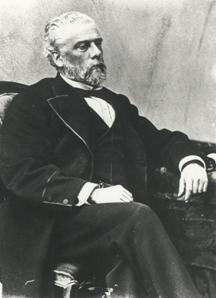 Víctor Balaguer (Barcelona, 1824 - Madrid, 1901) was the true "product manager" of the Catalan Renaixença, this being understood as a process of recovery of historical, linguistic and literary self-esteem that was particularly expressed in the restored "Jocs Florals" literary competition as an institution of cultural promotion coming from a medieval past and always as a reference to national plenitude, pact-making, the primacy of courtly love and the chivalric spirit. Somewhere between the liberal-moulded historicist romanticism and anti-naturalist idealism which, at the end of the nineteenth century, would connect with the spirit of the modernists, Balaguer’s literary production, first only written in Spanish and later in both Spanish and Catalan, would oscillate between speaking out in favour of individual and collective freedom and upholding non-utilitarian values. An admirer of Victor Hugo and in particular of the ideas that emerged in the France of 1848, seduced by the Italian Risorgimento, and setting his sights on the ideal of the Iberian Union and a plural Spain that would integrate its different historic nationalities and languages, his life was closely bound up with politics, either as a conspirator with Prim and the progressives, or as a professional politician, especially in the period following the 1868 revolution, when he was a minister several times, both under the new king, Amadeus of Savoy and during the Bourbon Restoration. Although he was the great precursor, leading promoter and populariser of the Renaixença, within which he was the main transformer of mentalities – in Edmund Burke's sense – his move to the Madrid of the two big parties that alternated in power meant his distancing from an increasingly politicised Catalanism as a third way that, first with Valentí Almirall and later with Prat de la Riba, he would begin by questioning and end up forgetting.