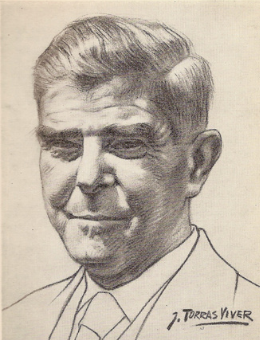 Martí Dot (Sant Feliu de Llobregat, 1900 – 1973), a metallurgist by profession, was a poet, fiction writer, and playwright. Self-educated, he mainly wrote poetry inspired by popular songbooks and the work of great poets like Verdaguer and Costa i Llobera. His simple style, shunning baroque-style symbolism and closer to folk literature, received many awards in literary competitions in several cities including Barcelona, Manresa, Cornellà and, in particular, his hometown, Sant Feliu de Llobregat, where his work was widely recognised.

In 1947, his play Joan Garí was premiered at the Centre Parroquial (Parish Centre) and, between 1960 and 1961, he published the novel Laieta in the magazine Alba. In 1973, the Sant Feliu de Llobregat Council published a posthumous edition of his poems (Poesies) and, in 2005, with the publisher Viena Edicions, an anthology of his poems. Since 1975, the literary award bearing his name, the Martí Dot Prize, has been given to young poets.