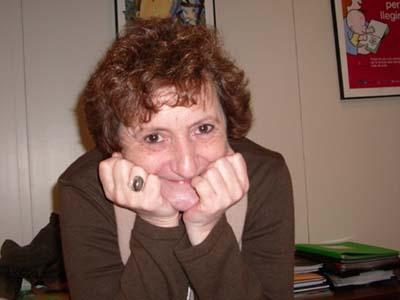 Teresa Duran i Armengol (Barcelona, 1949) is a writer and illustrator. A highly versatile author, she is outstanding for her books for children and young people, as both creator and researcher, and also for her work as a literary critic and in different areas of teaching and popularising literature. She obtained her degree in Graphic Design in 1975 and went on to complete another degree (1986), this time in Education, after which she obtained her doctorate (2001). Her activities are constant and varied and, as she herself has stated, she has managed to combine work and pleasure and to find both challenge and fulfilment in any project.

She has written over a hundred books for children and young people. Notable amongst these are Joanot de Rocacorba (Joanot of Rocacorba, 1982), A les fosques (In the Dark, 1989) and the collection Popof i Kokatasca (Popof and Kokatasca), which have been translated into Spanish, French, Portuguese, Korean, Basque and Galician. They have been awarded a number of prizes. She also writes as a regular contributor for children's magazines like Cavall Fort, Tretzevents and El Tatano. Furthermore, she works a translator and illustrator, with her beautiful images appearing in reviews and on CD and book covers, and she has also translated such notable works as Contes per telèfon (Telephone Stories) by Gianni Rodari, and Els últims gegants (The Last Giants) by François Place. She has directed a large number of exhibitions and has written radio, television, multimedia and theatre scripts.

Apart from all this, Teresa Duran has taught Design, has had a bookshop, is a cook, a cultural animator, storyteller, lecturer at public events, editor, and she has worked as a paginator and in advertising ... She writes on a regular basis for children’s, educational and specialised publications, in particular the magazine Faristol, of which she has been director for many years, and El Periódico de Catalunya, where she is children's books editor. She is presently working in the Department of Visual and Plastic Education in Teacher Training at the University of Barcelona. She is a member of the Associació d'Escriptors en Llengua Catalana (Association of Catalan Language Writers – AELC).