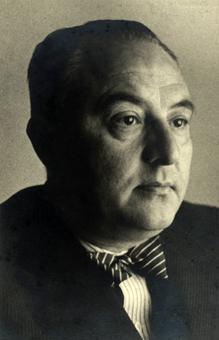 Agustí Calvet "Gaziel" (Sant Feliu de Guíxols, Baix Empordà, 1887 - Barcelona, 1964). Journalist and writer, he was the director of the newspaper La Vanguardia between 1920 and 1936. During this period, he became the most admired political journalist and the opinion's leader of the Catalan liberal burgeoisie. Exiliated during the Spanish Civil war, he returned in 1940, but he had to put an end to his professional career as a journalist. He moved to Madrid and begun writing travel and memory books, which obtained a remarkable succes of both critics and public, with titles such Tots els camins duen a Roma. Història d'un destí (1958). In 1959 he settled definitively in Barcelona, where he wrote the bulk of his work in Catalan.

In 1970 the whole of his work was published in a posthumous way with the title Obra catalana completa, as well as Historia de "La Vanguardia" (1884-1936), published in Paris in 1971. He is considered the first "modern" journalist in Spain and the first to introduce an international point of view in his articles.

Gaziel is, along with Pla o Xammar, one of the greatests names of the Catalan canon of journalism.