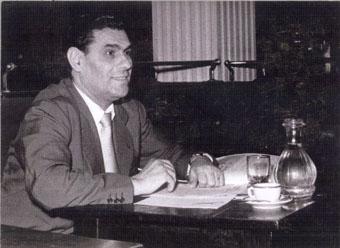 Sebastià Juan Arbó (Sant Carles de la Ràpita, 1902 - Barcelona 1984) was a novelist, biographer, translator and journalist. His novels offer a particular image of the River Ebro region which, far from simply dealing with customs and manners, have existential heroes who are swept along by misfortune and incomprehension. Examples of this are L'inutil combat (The Useless Combat, 1931), Terres de l'Ebre (The Ebro Country, 1932) -which was translated into Castilian, Italian, French, German and Dutch and which was also made into a film- Camins de nit (Night Tracks, 1935) and Tino Costa (1947). He wrote a number of biographies, notable amongst which are those of Jacint Verdaguer and Miguel de Cervantes, while he also translated works of Chateaubriand, Stendhal and Pushkin, amongst others. He was also an assiduous contributor of articles in the Barcelona press.

He was an honorary member of the Associació d'Escriptors en Llengua Catalana (Association of Catalan Language Writers).