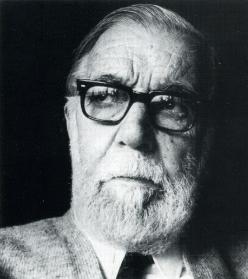 Joan Oliver (Sabadell, 1899 - Barcelona, 1986). He is also known by the name of Pere Quart, pseudonym for his poetic work. He was a poet, playwright, narrator, translator and journalist, and is regarded as one of the five major twentieth-century Catalan poets, and the most original of all.

His first collection of poems, Les decapitacions (The Decapitations) (1934) is a harbinger of the nature of his subsequent poetry —agile, anecdotal and drawn to realism— reflecting the traumatic experiences of the Spanish civil war and exile, revealing a desolate and sceptical vision of the world. Born into a bourgeois family of industrialists, and a co-founder with Francesc Trabal and Armand Obiols of the Grup de Sabadell (the Sabadell Group), his style as a writer was marked by his irony against conventionalism. As a translator, he received, in the 1950s, the Prize of the President of the Republic of France for his translation of Molière's The Misanthrope. In 1970, he was conceded the Award of Honour in Catalan letters, while in the 1980s he received the City of Barcelona prize, the Josep Maria de Sagarra prize for translation, and the Generalitat (Autonomous Government) of Catalonia prize for poetry. True to his non-conformist and critical stands, he rejected the Sant Jordi Cross of the Generalitat.

He was a member and Honorary Member of the Associació d'Escriptors en Llengua Catalana (Association of Catalan Language Writers).