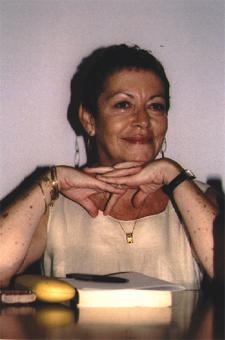 Maria-Antònia Oliver was born in Manacour (Mallorca), in December 1946. She was attracted by literature from a very early age, first as a reader and incipient poet and later in writing her own first narrative work. When she published this first novel, Cròniques d'un mig estiu (Chronicles of Half a Summer) she was only 23 years old, though the well-known writer Llorenç Villalonga affirmed at the time that this young author would go far. In fact, since that October in 1970, Maria-Antònia Oliver is a name that has won prestige in the world of Catalan literature and, through translations of her work, she has acquired a great number of readers both in Europe and the United States. With her husband, Jaume Fuster, she belonged to what has been called "the seventies literary generation". This generation was characterised by its desire to break away from the past and to look at the world anew from both the social and cultural points of view, a generation that set out to have a relevant and vanguard role in the Catalan literature of the time. With more than fifteen books published, Maria-Antònia Oliver has written novels, stories, theatre, scripts and reports. She has worked with different genres and some of her works have been translated into English, French, Italian, Spanish, German, Portuguese . . . She herself has also translated, into Catalan, writers such as Virginia Woolf, Jules Verne, Mark Twain, Robert Louis Stevenson and Herman Melville.

In 2016 she was honoured with the Premi d'Honor de les Lletres Catalanes.