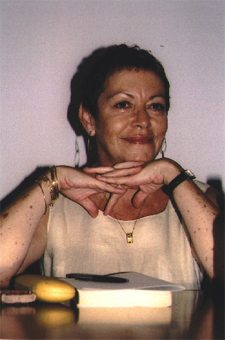 She thinks she's rubbing her eyes and then realises that everyone has his or her own body, she too, and he too, even if he's escaped from her, impossible to remember.

Going out into the midday sun she retrieves the company of his constant imaginary presence and the oppressive, weighty, warm distress of losing his eyes from her memory fades away.

At least let her conserve his image, if not the living, touchable presence, the image in colours, laughable Christ-of-Veronica representation, the image that keeps her company and helps her to face the streets, the mist, the sun, the rain, atmospheres.

The atmosphere full of low shining white mists, of different lights, when she woke up on winter Sundays, an early, early bird to make the most, from beginning to end, of a whole day without fumes, levitated in the calm of a sleeping city and houses hidden behind an uncommon whiteness, still not broken by the tardy sun.

Beyond the fog, higher up, the insinuation of a clear sky, a promise of the city all for them.

Looking at the deserted street and suspecting rather than seeing boys and girls in thick woollen socks, chunky Chiruca boots, corduroy trousers, hunchbacked with rucksacks, left-right, left-right, you'll find them five minutes later in the square, lords of the buses and early-morning loudmouths.

Observing, minute by minute, the rays tearing up the hazy awning, feeling the warmth that rips through the ethereal milky impalpable, frisking and frolicking through deserted streets.

Clean-faced and all spruced up are the houses, concierges putting their buckets out to air that one day of the week, cars dozing at the kerb like weary brass crickets and tucked in against laughing trees with leaves not of paper but real ones, trees that were the grass for citizen crickets.

Streets, long and clear, narrow and shadowed, without a speck of dust, hoarfrosted little squares, foliage that plays hide-and-seek with the fugacious mist, startled by the sun, benches damp with a prodigious dew and placidities of cat flaps turned into dreams, unruly in the hardness of the wood.

Stretchings of the city.

Guessing at an onrush of water in furious battle against white tiles; hearing the murmur of water burping over the coffee pot behind closed blinds.

A couple of old people in their Sunday best were making their way, still, to mass, and a family carload snatched strident echoes from the monumental portals, whirring towards greennesses yearned for all week.

Light movements hither and thither, fleeting, evanescent flickering of light and shadow, of people inside a house, a doorway or the other end of the street.

Then the blue was explosive and not even a memory remained of the mist, as if it were impossible that it had ever been there, twined around the bare and solitary clotheslines.

And the dogs came out to piss against the trees: haughty and frisky they went about their task with serious mien, freed of their leads and sudden loud noises. And since the owner had remained upstairs, they had the luxury of wetting wheels and doorways with irrepressible delight. They then wagged their tails in satisfaction and sniffed up at the sky, surprised by so much brightness. They went back to marking out their territory, now condescendingly, finally to sit thoughtfully in the slice of sun that was growing like a pumpkin vine.

In the centre, it seemed barely credible that such a throng had gathered. It was as if silence and commotion had gone separate ways and divided the city into two.

Where had they come from, this growing mass of people monotonously shuffling their feet to and fro, to and fro?

Middle-aged couples with a little packet of cakes swinging from the tip of the right-hand thumb, a gentleman rejuvenated by the incipient Sunday and the bunch of flowers in the crook of his arm; small boys and girls playing among legs; tables in the squares and esplanades full of young people ready for their beer or vermouth.

Where was all the dust hidden, all the soot of every day?

There were also slow Sundays with background music and studies and notes, solitary and accompanied both, while outside the morning mists painted the houses in black and white.

Now she's shuffling along like the sunny Sunday morning promenaders, sitting on a stone bench facing the sea, looking at the cordillera of incomprehensible waves. Over which fleetingly pass the eyes and mouths and brows and hair of friends from the Sunday afternoon group, the furtive companions of some evenings, people from nearer and further away.

Shaded-away faces of school drawings done with Goya paints. Earth-coloured eyes painted in a variety of soft tones spread with a fingers until the sea that enveloped the earth on the map became a sky-coloured smudge, darker at the coasts, faint and confused with the white of the paper, on a lost, lineless horizon.

So clear and so forceful now before her eyes, the navy-blue line that serves as the background to lost friends, strayed to heaven knows where.

"Today the sea's runaway blue", Jaume had once said.

Forgotten was the incomparable sensation of the security of being able to tell someone everything, the most intimate intimacies, the most banal banalities, any old drivel, feelings, thoughts that can't be spoken with words because there are no words to speak them.

"Thoughts without words … is that possible?" Virginia had said one day.

A closed door that, late in the day, they both opened and, in the hideaway of things only felt, merely hinted at, there was no corner left to expurgate.

The impermeable compartment that each any and everyone the world over has stashed away between the folds of the brain and heartbeats, inaccessible to anyone else, private box of one’s own goods, reserved exclusive terrain marked out with a life penalty on it: this was also shared, wide-open between him and her.

The doors of memory have shut and behind them are furiously-beating images. They want to materialise in bodies, voices, gestures and it is only possible to see, passing over the sea that extends cold and indifferent before her, distant ranks of vapours and murmurings.

Now, not even him or friends. Nothing.