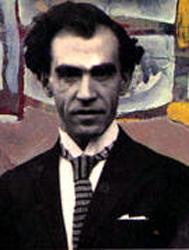 Miquel de Palol i Felip (Girona, 1885-1965) was a poet, novelist and playwright. He is particularly remembered for his association with reviews like L'enderroch (1902) and Catalanitat (1910-1911), of which he was a founder, and also the newspaper El Poble Català.

Notable in his fictional work is the novel Camí de llum. Narracions d'un crepuscle (Way of Light. Stories of a Twilight, 1909) and his stories for children and adults. The critics tend to pigeonhole his prose works under the heading of decadentist symbolism.

Among his collections of poems are Roses (Roses, 1905) and Poemes de tarda (Afternoon Poems, 1922) both along clearly classicist lines. Two posthumous works have also been published, Girona i jo (Girona and I, 1972), a personal chronicle that is, at the same time, a memoir of his city, and Narracions extraordinàries (Extraordinary Tales, 1983), which brings together his stories for children, in particular those published for the Girona-based magazine Ploma i Llapis.

He also wrote several works for the stage, among them Senyoreta Enigma (Miss Enigma, 1921) and Les petites tragèdies (Small Tragedies, 1923). He was a co-founder of the literary competition known as the Jocs Florals of Girona (1903).