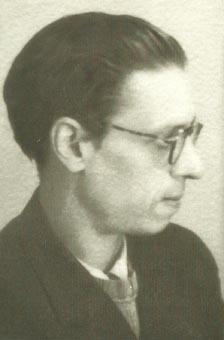 Joan Prat (Sabadell, 1904 - Vienna, 1971) was a poet, literary critic and journalist who is mainly known by his pen name of Armand Obiols.

He wrote for several newspapers, for example Diari de Sabadell, La Veu de Catalunya, La Publicitat and La Nau, where he published articles about Sabadell, poems and literary criticism. Between 1937 and 1947 he was editor-in-chief of Revista de Catalunya.

Along with Francesc Trabal and Joan Oliver and with the aim of working towards cultural renovation in Catalonia, he founded, the "Grup de Sabadell" (Sabadell Group) and, in 1924, the publishing house La Mirada, which brought out books by the most innovative Catalan writers of the times. In the years of the Republic he actively participated in Catalonia’s political and cultural life, after which he went into exile in France in 1939, whereafter he was closely associated with Mercè Rodoreda. He eventually worked for the United Nations in Geneva and then in Vienna, where he died in 1971.

Thanks to his exigent spirit and perfectionism his work was only published posthumously. Poemes (Poems) appeared in 1973 and, after 1988, the Sabadell City Council and the La Mirada Foundation published a good part of his work: Mirall antic i altres poemes (Old Mirror and Other Poems, 1988), Buirac (Quiver, 1996), Lectures del romanticisme (Readings of Romanticism, 2006), inter alia. The collection of his work is to be found in the Arxiu Històric de Sabadell (Historical Archive of Sabadell).