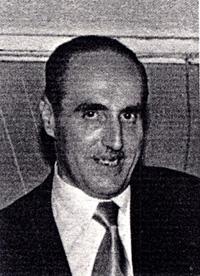 Sebastià Sánchez-Juan (Barcelona 1904 – 1974) was a poet and style corrector. A friend of J.V. Foix and Salvador Dalí, he espoused avant-garde positions in the 1920s. He was very young when he published his Segon manifest futurista (Second Futurist Manifesto, 1922) and other books along the same lines, for example Fluid (1924). As a style corrector he often worked closely with his mentor, Pompeu Fabra.

He was a strict Catholic and was dazzled by the early days of the Franco dictatorship but, in the 1950s, he began to publish in Catalan once again, although these latter books represented a great departure from the avant-garde theories that marked his early work. Notable among the works of this second period are Principat del temps (Principality of Time, 1961) and Escaiences (Contingencies, 1974). He also translated poetry from other languages and was declared the winner in the 1936 Barcelona Jocs Florals Festival, and received the City of Barcelona Poetry Prize in 1951.

On the occasion of the centenary of his birth, his children have collaborated in bringing out his complete Poetic Works, published in two volumes by Claret (2003).