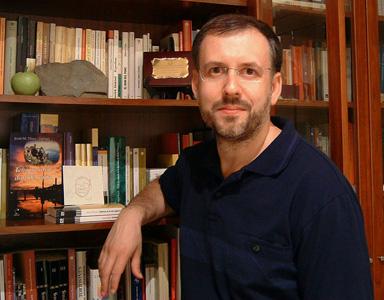 Jesús M. Tibau Tarragó Jesús M. Tibau Tarragó was born in Cornudella de Montsant (Priorat, 1964) and now resides in the city of Tortosa on the banks of the River Ebro. Since writing his first short story in 1992 he has become a specialist in the field with some two hundred published to date in five collections: Tens un racó dalt del món (You Have a Corner above the World – editorial Montflorit, 2001); Postres de músic (Musician's Dessert – editorial Empúries 2005), winner of the Marian Vayreda Prize of the City of Olot; El vertigen del trapezista (Vertigo of the Trapeze Artist), Una sortida digna (A Dignified Exit), I un cop de vent els despentina (And They Were Tousled by a Gust of Wind), El noi del costat del padrí (The Kid Besides the Godfather), the latter four books being published by Cossetània Edicions (2008, 2009, 2011 and 2014) and No és la derrota, sinó el vent by Onada (2016).

Comments on his stories highlight their originality, fine irony, intelligent use of language, tendency to surprise and his portrayal of the everyday world in a way that is full of tenderness. His characters, often losers, strive to keep a balance between past and future (El vertigen del trapezista), or attempt to mock death (Una sortida digna) or struggle against life's blows, trying not to fall (I un cop de vent els despentina).

His literary style has a decided predilection for the short story and, moreover, for increasingly brief tales that he has been whittling down to the form of the nano-story of very few lines. He sometimes writes these spontaneously on the social networks, for example in his blog "Tens un racó dalt del món", as well as Twitter and Facebook.

The town of Cornudella de Montsant and the region of Les Terres de l'Ebre frequently provide the backdrop for his stories, which he reads with the accompaniment of music by David Espinós in a show of small-scale format called Relats a recer d'una guitarra (Stories in the Shelter of a Guitar).

His work has been the basis for a diverse range of artistic endeavours including the short films Espantant gavines (Scaring Gulls), produced by an amateur group from Les Terres de l'Ebre, and Magnetisme (Magnetism), made by sixth-year pupils at the Daniel Mangrané de Jesús Primary School; the play Una sortida digna (A Dignified Exit) by the TEBAC theatre group of Reus; and the work for adults Petits fours, performed by the puppet show company "L'invisible".

Jesús M. Tibau is a member of Association of Catalan Language Writers (AELC), and he has been coordinator of the Readers' Club at the Marcel·lí Domingo Library of Tortosa since December 2006, and has also worked as scriptwriter and presenter for the Terres de l'Ebre Channel 21 television programme Tens un racó dalt del món (You Have a Corner above the World) since March 2010.