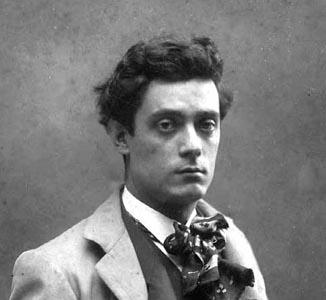 Juli Vallmitjana (Barcelona, 1873-1937) wrote stories, fiction and plays. A silversmith by profession and family tradition, his initial vocation was painting. He studied at the Escola de Belles Arts de Barcelona (Barcelona Art School) and associated with the painters of the "colla del safrà" (Saffron Group). He then renounced painting in favour of literature as a result of personal indecision and the influence of theosophy. He was well acquainted with the marginalised, low-life existence of the Barcelona Gypsies and, along with his readings about their history, this knowledge constituted the basis of his literary production, which included works such as Sota Montjuïc (Beneath Montjuïc, 1908) and La Xava (The Lass, 1910); the short-story collections De la raça que es perd (On the Race That Is Lost, 1917); and the plays Els Zin-calós (The Gypsies, 1911), En Terregada (In Terregada, 1912), and Rují (1918). These writings share his way of depicting of the rawness of the sordid lives, customs and speech of the Gypsies. His expressive power, of great vigour when portraying his cast of characters, is enriched by his inclusion of Caló vocabulary.

A unique author in the panorama of Catalan literature, he had some connection with Modernist writers whom he deemed excessively intellectualised. In his final phase as a playwright, he produced works of social and political content, for example the El barander (The Mayor, 1923). In the closing years of his life, he stopped writing theatre and turned to short stories, the majority of which have never been published.