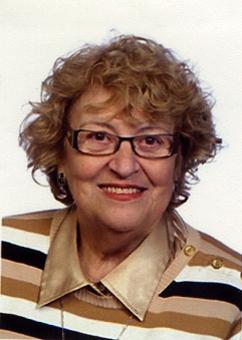 Angelina Vilella Ros was born in Olesa de Montserrat, Baix Llobregat in 1938. When she was three years old her family moved to Hospitalet de Llobregat (Barcelona region), where she has lived to the present day. She is a qualified nurse and worked as such until she retired.

She has attended several courses at the Aula de Lletres (Hall of Letters) and, subsequently at the Escola d'Escriptura de l'Ateneu Barcelonès (Writing School at the Athenaeum of Barcelona). In 1993, she obtained two awards in the Hospitalet de Llobregat "Jocs Florals" literary competition. At the age of sixty she published her first book, Onades internes (Inner Waves, 1999), a novel dealing with such themes as immigration, love and rivalries. The following year (2000) she published Jo… també recordo (I … Also Remember), a memoir of her childhood in Hospitalet in the years following the Spanish Civil War. In 2007, a revised version of Onades internes was published, now with the title of Temps d'Orquídies (The Time of Orchids) [available from Amazon and iTunes].

She wrote for the weekly publication La Proa del Baix Empordà (1997-2000), for which she interviewed more than a hundred residents of the Empordà region, and has also published articles in several publications including the bulletin of the Hospitalet Athenaeum of People's Culture, the Andorra-based Magazín, the review Infermeria (Barcelona) and Atenea, which is published by the School of Writing at the Barcelona Athenaeum. She has given a lecture at the Universitat Autònoma de Barcelona on the American years of Ramon Vinyes and, in 2010, she took part in the AELC-Memoro interview project "Lletres i Memòria" (Letters and Memory).

She is an honorary member of the Associació d'Escriptors en Llengua Catalana (Association of Catalan Language Writers, AELC).