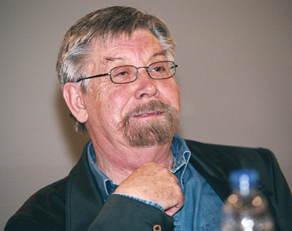 However, it wasn't that August morning when Aunt Amàlia took me back into father's past but almost a quarter of a century later, that last time I went to Andratx, which was in autumn too, to clear up matters with inheritance papers – my grandmother's, long ago; the curate's, relatively recent – and also to delve into still other files trying to pick up the threads, however fine they might be, of my father and other ghosts.

Going to Son Farriol was something I decided just after sunset one afternoon. The track into the property was straight, flanked by pomegranate trees. I stopped to touch one of the pomegranates, seething in its mineral garnet red. It seemed as if I was repeating actions that had been carried out again and again on other occasions, although I had only set foot in Son Vadell that one summer's day. But perhaps, in being summoned up, the memory of those hours, of that reality that was so precise and vivid, had triumphed over the order of time to take on a somnambulistic existence, as if set in some timeless, fixed and funereal space.

The garden, the tangle of seedbeds crisscrossed with canes, was starting to give off a tenuous whiff of damp. Yet the earth of the track was hot, still impregnated with the afternoon sun that had surprisingly been intensely hot, as if it were orbiting lower than usual. It seemed that a huge beast had gone along the track before me, leaving a warm trail behind it: for a moment I thought it could have been the mighty fairytale dragon that panted out its fiery breath as it guarded the garden of the Love for Three Oranges in the lost rocky slopes of the other side of the river … The one in the story my father told me just before he left.

Around the house, the magnolias had just about lost all their leaves. They rose darkly, half naked against the façade, startling in their severity. A few doughy-looking, late-blooming flowers remained, sad and bloated in their whiteness, like a sign of exotic mourning. There was not a soul to be seen. The great staircase was devoid of plants: only steps and walls, toasted stone, rough, stark nudity. I went inside, into the silent, dusty house, the hall weighed down with neglect … I don't know if it was the perfume, cloying around me, that made me aware of the presence of Aunt Amàlia before I saw her.

*This book has been translated into English by John L. Getman and was published with this title by the University of Arkansas Press in 1995 [Translator's note].

"Excessive? What's wrong with the poor is that it's not only their belly that's poor but also their spirit. And you know how that shows up? Someone who's poor is sure he's right, whatever he thinks, and he confuses ignorance with firmness. It may be some kind of paradoxical need, but it’s more like mummification. Look at my mother: she’s the perfect example."

Elianor went on eating without pause, not even listening to her son. Olympia took up her argument again, "Anyway, there are roots, ecology, and a way of thinking that nobody can deny in today's world, there's Porto Alegre, antiglobalisation and, from what you say, something's got to be done because …"

"Forget it", interrupted Sinibald. "We've acted like complete idiots and we can't see it: we've even sold our dead."

Marika was stupefied. "What utter nonsense!"

Elianor, her words mixed up with a mouthful of almonds, mumbled, "Now there's a corpse talking through the winding sheet."

Was Sinibald feeling inspired, was his ideal spectre that he’d buried so deep and that had all of a sudden been so confusedly goaded now tugging at him? And was that because of this splendid woman who'd arrived, with her warm bodily emanations, her deep eyes and viscous saliva? There were times when Sinibald's long-deferred and now consubstantial bitterness, on receiving an unlooked-for injection of yearning, set off old perceptions and stabbingly painful unfulfilled ambitions, the brew boiling away to bring about an instant and acute dialectical conflict, a clash of intuitions: this was the Sinibald that had not been.

"It's what I saw and experienced when I was young", he said distractedly, "here in Sant Elm and Andratx, in the fifties. In Palma they were only thinking about the money they could make on every bit of the island's land that was being sold, every hotel that was being built in a beach and every house bought by a foreigner. The city of the people who painted it all up was like a big shop. But in the villages, which is where the real dealing was going on, almost as soon as somebody got rid of a property he started feeling uprooted, even if it wasn't easy to understand what was happening: the thing is that, with the sale, he’d also put his dead on the market."

"I think I understand you …" Olympia frowned slightly.

"Whether it was a property or a farm, it was full of the stories of every family and the benign ghosts of their predecessors. At Coll Baix I saw my grandmother milking a goat, at Sa Coma Freda, my uncle fell with his horse and broke a leg, my father told me that his great-great grandfather had built that well at Son Serra, at Christmas we all used to have dinner together at the house of my uncle and aunt from Son Sampol, here in Sant Elm we had a splendid grove of fig trees, my grandfather from S’Arracó was a balladeer, and at Son Orlandis we danced boleros with my Sandalina cousins, everyone mixing together and enjoying the springs and autumns that were for all of us."

"Biel Sandalina was a thief", muttered Elianor of Cas Manescal.

Sinibald ignored her. "I mean, as a boy I was myself, and evidently everyone was himself but we had all our dead incorporated too, and their immemorial memory stayed alive in the living thanks to the places, geography, architecture and furniture that had been the settings or instruments that housed the corporealities and entities of bygone times. We lived in a limited, physical space with no psychic limits and it was our one land, our one air and it was as palpitating as any total and centuries-old life that goes on and on and keeps evolving through mixing. And, of course, when we sold our land and houses we sold the memorial gravidness of our ancestors at the same time, and we broke the deep genetic chain of who we are, only to remain orphans of ourselves as a result."

Marika, impervious to the reasoning in Sinibald's speech, shook her head. "People sold their properties to strangers and were happy to welcome tourism, despite the abuses that occurred and even you recognise often enough that everyone's been hungry and that the dollars, marks, francs and pounds have saved us from poverty."

"Yes, but it reduced the old people to idiocy when all they had left was themselves, isolated and sitting around the fireplace or in the café, now bereft of the voices of the old houses and fields that were once open with work and harvests, with their genetic makeup predominating over the whole atmosphere. And that genetic makeup without dialogue turned into manifest melancholy."