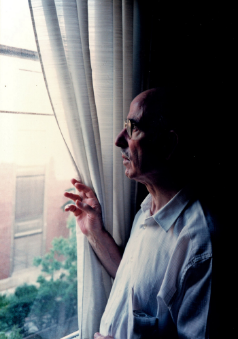 Lluís Albalate i Guillamón (Vilanova i la Geltrú, 1916 – Valencia, 2008) was a Catalan writer, poet, and winemaker. After spending his childhood in Vilanova i la Geltrú, which he would always evoke in his work, he followed a religious vocation and studied at the Barcelona Seminary and also Philosophy at the University of Barcelona, after which he moved to Valencia and left the religious life. He then worked in the field of winemaking and founded a company that made machinery in this sector as well as editing the publication La Semana Vitivinícola.

His work, combining poetry, prose and, especially, memoirs in both Catalan and Spanish, became publicly known in 1959, although the circulation was small owing to the fact that they were published privately. Notable among them are the poetry collection Arran de mar (1992) and Cap de creu (1988, a book of prose pieces evoking the Vilanova of his childhood, which was expanded in 1993), and several studies, including Manuel de Cabanyes. Apuntes (1987-1988).

He was an honorary member of the Associació d’Escriptors en Llengua Catalana (AELC – Association of Catalan Language Writers).