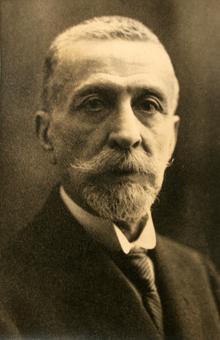 Joan Alcover (Palma, 1854-1926). Poet, essayist and politician. In his poems one finds an aesthetic interpretation of the pain he suffered from the death of his wife and children. Like his contemporary, Miquel Costa Llobera and other members of the Mallorca School, he found in the landscape symbolic parallels with his particular states of mind.

Nonetheless, he was not attracted by the more extreme elements of Modernism but rather identified with certain aspects, like the expressive restraint and formal rigour, of the incipient movement of Noucentisme. His literary theory was based on sincerity of feeling and clarity in poetic form. Some of his poems have been translated into different languages and set to music, for example La Balanguera (which was put to music by Amadeu Vives) and which, in 1996, was declared the official hymn of Mallorca.