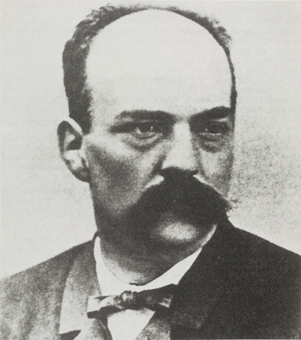 Valentí Almirall i Llozer (Barcelona, 1841-1904), scion of a bourgeois family of Barcelona, was a politician, lawyer and journalist. A cultural activist of great political importance, he was an outstanding figure of "la Renaixença" movement, which aimed at the full restoration of Catalan as the language of culture in the second half of the nineteenth century.

His public activity began with his participation in the Revolution of September 1868, "La Gloriosa". He created the Federal Democratic Republican Party, was president of the Federalists' Club, director of the newspaper El Federalista and wrote for the progressive press while also playing a significant part in the forging of the Tortosa Pact (18 May 1869), an ideological and organisational project of republicans and federalists from Aragon, the Balearic Islands, Catalonia and Valencia. He was also director of the Industrial and Mercantile School of Sabadell and a Barcelona City councillor.

His influence is particularly relevant in his writings and their political direction. He published a number of works on federalism and Catalan nationalism, for example Lo Catalanisme (Catalanism), which is considered to be the most representative among them. He was a member of the Ateneu Lliure de Barcelona (Free Athenaeum of Barcelona), the Ateneu Barcelonès (Barcelona Athenaeum) and an active participant in the literary competition the Jocs Florals. After 1879 he published his last works, conceived and organised the two Catalanist Congresses of 1880 and 1883, the Congress of Catalan Jurists (1881) and the Catalan Centre Congress of 1882, while also drawing up the Memòria en defensa dels interessos morals i materials de Catalunya (Memorandum in Defence of the Moral and Material Interests of Catalonia), otherwise known as the Memòria de Greuges (Memorandum of Wrongs, 1885), which was presented to the Spanish monarch.

One of the leading figures of the intransigent, Barcelona-based, federalist movement, he had reached his political and intellectual plenitude by around 1886. While his political project did not prosper, his ideological legacy and his political career constitute key points of reference for understanding political Catalanism.