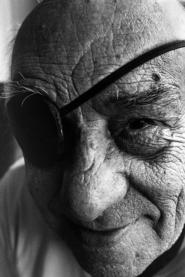 Avel·lí Artís Gener (Barcelona, 1912 - 2000) writer, journalist and artist. He is a well-known author with books like Paraules d'Opoton el Vell (Words of the Elder Opoton) and he has been awarded, amongst others, the Prudenci Bertrana prize for his Prohibida l'evasió (Evasion is Prohibited), the Sant Jordi prize for L'enquesta del canal 4 (The Channel 4 Survey), and the Ciutat de Barcelona and Serra d'Or Critics' prizes for Viure i veure (To Live and See), his significant book of memoirs. Student at the Escola de Belles Arts (School of Fine Arts), at an early age his journalistic gifts were evident, as both writer and cartoonist, and his cartoons were published in a number of dailies and weeklies, amongst which figure L'Esquella de la Torratxa, La Rambla and La Publicitat, during which period his pseudonym Tísner became well known. He fought in the Spanish civil war (1936 - 1939), enlisting as a volunteer, first as an ordinary soldier though later he would become a lieutenant-colonel. He was obliged to seek exile in Mexico where he took up his journalistic work again with reviews such as Pont Blau and La Nova Revista. In Mexico, he met up with other exiled writers, in particular with his brother-in-law, Pere Calders, to whom he was very close, both in Mexico and on their subsequent return to Catalonia. Avel·lí Artís returned from Mexico in 1965. Once re-established in Barcelona, he returned to journalism and took over the La Vanguardia crossword section. His lastest books, published before his death, are the two volums of Ciris trencats (Broken Candles), a collection of his broadcast commentaries on Catalunya Informació.

He was a founding member of the the Associació d'Escriptors en Llengua Catalana (Association of Catalan Language Writers) and was President from 1990 to 1994.