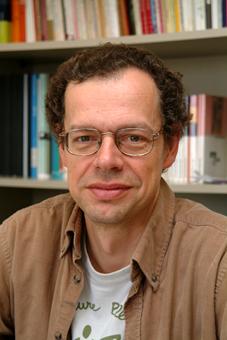 Jaume Aulet i Amela (Terrassa, 1959) is an essayist and university lecturer. He obtained his doctorate in Catalan Philology from the Autonomous University of Barcelona in 1989, after which he has been working in the field of Contemporary Catalan Literature. He has been engaged in research programmes on Catalan poetry and novels, while also working in group projects and with jointly produced books.

He has written several books of essays about Modernism and the work of Joseph Carner, for example L'obra de Josep Carner (The Work of Josep Carner, 1991) and Josep Carner i els orígens del Noucentisme (Josep Carner and the Origins of Noucentisme, 1992). He has been awarded prizes and grants that have enabled him to engage in further research work, including the Jordi Rubió i Balaguer Prize (1989) for his work on the history of Catalan literature, and the Manuel Milà i Fontanals Prize (1991) for the best doctoral thesis. His writing also appears in articles in the press, prologues and chapters in books on the history of Catalan literature. Notable among his essays are those published in Serra d'Or or others concerned with both the classics and the work of contemporary authors, where he is particularly interested in the books of Jaume Cabré, Pere Calders and Anna Murià.

His essay “Miquel Desclot i la poesia per a infants" (Miquel Desclot and Children's Poetry, 2004), where he analyses the presence of children's poetry as a genre in Catalonia, was the winner of the Fourth Aurora Díaz-Plaja Prize, which is awarded by the Caixa Penedès Foundation and AELC. Aulet has also organised cultural exhibitions and is the director of a post-graduate course on Theatre History and Criticism. Since 1987, he has been coordinator of the Terrassa City Council's Bartra Papers Collection.