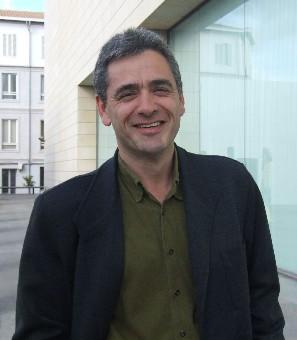 Francesc Bodí (Agres, 1963) is a lecturer in Philosophy and novelist. In 1994, he was awarded the Enric Valor Prize for the Young People's Novel with his book Volves i olives (Husks and Olives) and, in 1995, the Alambor Prize for Cruïlla (Crossroads). In the same year he published Passions apòcrifes (Apocryphal Passions). His novel Guerres perdudes (Lost Wars, 1997) received the 1996 Joanot Martorell Prize and the 1998 Critics' Prize for Valencian Writers.

In 2001, his novel L'infidel (The Infidel, 2000), was the winner of the 5th Enric Valor Prize for the Valencian Novel as well as the Critics' Prize for Valencian Writers while, for Havanera (Habanera, 2006), he received the 2005 Alfons el Magnànim Prize and the 2006 Critics' Prize for Valencian Writers. The latter work may be described as belonging to the genre of magic realism and, in fact, his work generally contains fantasy elements alongside historical or more everyday themes. In 2006, he published L'espill delator (Incriminating Mirror).

The fiction of Francesc Bodí is notable for its well-paced and direct style and his simultaneous use of first and third persons. In sum, he should be regarded as one of the leading writers of his generation.