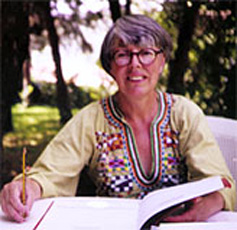 Pilar Cabot (Vic, 1940 - Tavèrnoles, 2017), she wrote poetry, fiction for adults and children, and stories, while some of her works have also been staged. She wrote numerous pieces of literary criticism, book notes, prologues, scripts and articles in the press, was interviewed in a good number of areas of the mass media and took part in radio and television panel discussions.

For many years she was an active participant in the cultural milieu of her region of Osona. From spring 1965 to autumn 1985 she worked in her own bookshop CLAM, which became a focal point in the diffusion of Catalan culture. She was coordinator of "Tertúlies amb poetes" (Chats with Poets), a literary initiative where, in an appropriate atmosphere, the works of the most diverse range of poets were rigorously studied. These sessions took place in the Joan Triadú Library in Vic and had led to the creation of a collection – Col·lecció La Biblioteca (The Library Collection) - which brought together in three anthological volumes the work the group has done on the poets studied to date.