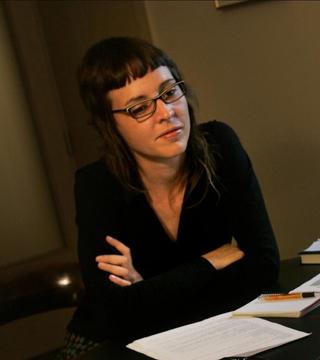 Núria Cadenes i Alabèrnia (Barcelona, 1970) is a writer and works as a bookseller and journalist.

The first two books she published are directly concerned with her experience as a political prisoner when, after being detained when she was eighteen years old, she spent almost six years in different prisons around Spain and was the focus of an intense solidarity campaign: Cartes de la presó (Letters from Prison), a collection of some of the letters she sent home to her family; and Memòries de presó (Prison Memoir), an account of her first four years in captivity. After being released, she published the novel El cel de les oques (Sky of the Geese) and, after moving to the Valencia region – where she still lives in Cabanyal, by the sea – a biography of Ovidi Montllor, L'Ovidi.

Her more recent works demonstrate her creative versatility. These include an invitation to discover the southernmost part of Catalonia, Vine al sud! Guia lúdica del País Valencià (Come South! A Fun Guide to the Valencia Region) and a collection of stories AZ, for which she received, in 2008, the Ciutat d'Elx Prize for Fiction. In 2013 she published the novel El banquer, and in 2016 she was awarded the Crims de Tinta prize at the BCNegra festival for her novel Crims de tinta.

From 2013 to 2021 she was member of the Valencian Board of the Associació d'Escriptors en Llengua Catalana (Association of Catalan Language Writers, AELC).