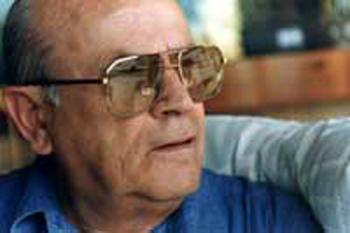 Bernat Capó (Benissa, 1928-2017) was a writer and journalist, a humanist of exemplary civic accomplishment.

He played a role in many cultural ventures, such as the founding of the Diari de Valencia and Noticias al Día. An aim of his writing was the restoration of the culture and language of the País Valencià and his articles have been published in El Temps, Saó, Mediterráneo, Levante and other the other papers previously mentioned.

As a writer, he was interested in popular culture, a theme he addressed in his narrative fiction books, for instance Espigolant pel rostoll morisc (Gleaning the Moorish Stubble – 1980) or the collection of essays Costumari valencià (Valencian Customs – 1992-94). In recent years he has been honored by his home town, which has named Benissa's municipal library after him. He was also honored in 2001 by a group of Catalan witers with the publication of a collection of his work. In 2013 he was honored with the Silver Medal of Consell Valencià de Cultura. In 1999 the publishing company Bullent created the Berdard Capó Culture Award.

Capó was an honorary member of AELC (Association of Catalan Language Writers).