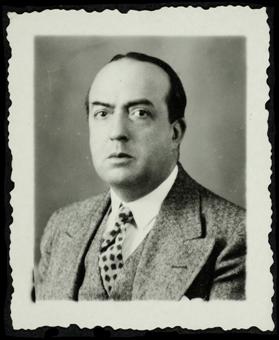 Josep Carner (Barcelona, 1884 - Brussels, 1970), is known as "the prince of Catalan poets". He was a renovating influence in poetry, prose and the language itself. He created a new style of political journalism and became a redoubtable polemicist . With a degree in Law, Philosophy and Letters he started out in consulates and subsequently became a diplomat working in Genoa, San José de Costa Rica, le Havre, Hendaya, Beirut, Brussels and Paris. During the Civil War he took the Republican side and never lived in Catalonia again. Els fruits saborosos (Delicious Fruits), published in 1906, is regarded by the critics as one of the high points of Noucentisme (a Catalan political and cultural movement at the beginning of the 20th century), of which he was in the vanguard. His poetic work moved towards post-symbolism with books such as Auques i ventalls, El cor quiet and Nabí. He was a notable translator of works by writers such as Dickens, Shakespeare, Mark Twain, Arnold Bennet, Musset, Lafontaine, Defoe and Lewis Carroll. When he was only 26 years old, he was proclaimed "Mestre en Gai Saber" (Master in the Art of Poetry) in the 1910 Jocs Florals (Literary Contest).