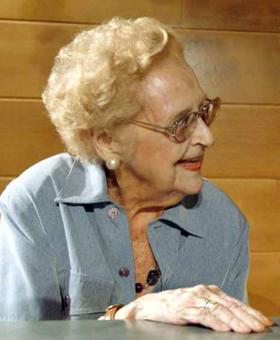 Carmelina Sànchez-Cutillas (Madrid, 1921 - Valencia, 2009), historian, poet and novelist. During the 1960's, at the height of Social Realism, her first poetry compilations were published, and titles such as Un món rebel (1964), translated into English as A rebel world (1969), Conjugació en primera persona (1969), or later on Els jeroglífics i la pedra de Rosetta (1976), elevated her among the generation of Valencian Postwar period poets. She received public recognition, however, with the novel Matèria de Bretanya (1976) awarded the Octubre-Andròmina de narrativa (1975) and republished in more than ten editions. This novel hold great esteem in the cultural and linguistic recovery movement of the Valencian Community that begun in 1970's.

Quoting Lluís Alpera: "the nostalgia for a past in which real facts were lived in an intense way, is presented in the literature of Sànchez-Cutillas –in the novel as well as in the poetry– bound together with her imaginative power."

Ms. Sanchez-Cutillas has been appointed "Valencian of the 2008" and was a member of Honors of the Associació d'Escriptors en Llengua Catalana.