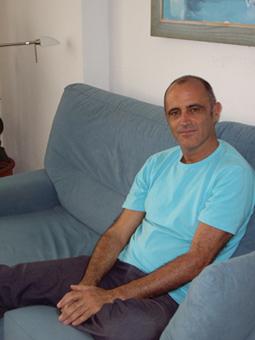 Joaquim Espinós (Benilloba, 1962), lectures in Catalan Philology at the University of Alicante and his main field of study is contemporary Catalan literature. He has published numerous articles on this theme – with particular reference to the years that followed the Spanish Civil War, exile and present-day literature – in a number of reviews, for example L'Espill, Caplletra o Catalan Review, as well as in collections of writings dealing with these themes. Among his published books are La poètica de l'imaginari (Poetics of the Imaginary, 1999, University of Alicante); La imaginació compromesa. L'obra d'Agustí Bartra (The Committed Imagination: The Work of Agustí Bartra, 1999, University of Alicante); and Història d'un entusiasme. Nietzsche i la literatura catalana (The Story of an Enthusiasm: Nietzsche and Catalan Literature, Pagès, 2009), for which he was awarded the Josep Vallverdú Essay Prize. He has also taught literature, with particular attention to the writing workshop and, in this sphere, has published Literatura creativa (Creative Literature, 2000, Bullent). He writes as a literary critic for a range of publications, for example the Alicante-based newspaper Información and the reviews L'Espill and Caràcters.

His early inclinations in his writing were for poetry but he eventually tended more to the genres of fiction and essay. He has published the narrative works La devastació violeta (Violet Devastation, 1991, Bullent), winner of the 1990 Enric Valor Prize for Young People's Writing; Joan de l'Iris i el rossinyol (John of the Rainbow and the Nightingale, 2002, Ajuntament de Meliana), winner of the 2001 Empar de Lanuza Prize for Children’s Literature; and the novel Ombres en el riu (Shadows in the River, 1995, Bullent). In 2006, he was the winner of the "Antoni Bru de l'Ajuntament d'Elx" Prize for his crime novel El cervell de la serp (Brain of the Snake, 3i4).

He is a member of the Association of Catalan Language Writers.