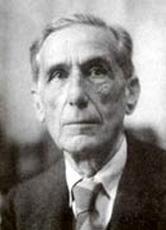 Pompeu Fabra (Barcelona, 1868 – Prada de Conflent, 1948), linguist and grammarian. He came of age during the Modernisme literary movement and under the influence of L'Avenç (an early and highly influential pan-catalanist cultural journal) yet he also was well received by the rival Noucentistes, who helped Fabra to win popular acceptance for his Catalan language ideas. With L'Avenç he published his first major works, such as Tractat d'ortografia catalana (Treatise on Catalan Orthography – 1904) and the Gramàtica de la Llengua Catalana (Grammar of the Catalan Language – 1912). Successive editions of these books and others such as Normes ortogràfiques (Orthographic Norms – first edition 1913) set in place the rules for modern, standardized Catalan. But Fabra also became a touchstone for Catalan writers, above all for his articles collected in the book El català literari (1932).

After the Civil War and a roundabout journey that took him to Paris and Montpellier, Fabra settled in the Prada de Conflent, a small town just over the Pyrenees from Catalunya, and labored at the endeavor that would occupy the last portion of his life, the Gramàtica Catalana, a book in one volume that was finally published in 1956 thanks to the efforts of the grammarian's disciple, Joan Coromines.