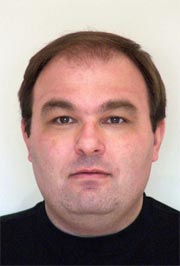 Àngel Fabregat (Belianes, 1965) is a writer and journalist. He has published three books (a collection of poems, a mini-novel in Spanish, and a collection of short stories).

He started to write at the age of seventeen after finding a certain magic in the poems of Federico Garcia Lorca, although over the years he has discovered the charm of other authors as well. He seeks in brevity the essential tool for communication to endow his texts with depth and intensity.

What is the point of literature? Àngel Fabregat believes that the union of the Latin words

littera and dura say it all: the word that lasts. He thinks that we write to last, just as we literally endure as a species. Although he has sometimes stopped writing for more or less long periods, he has always ended up going back to it. He considers that there is a therapeutic element in the art of writing that helps one to get rid of personal demons and also to vent one’s feelings by telling stories because, basically, we are made of stories.

He believes that literature is a tool that human beings can use for communicating, for feeling emotion, and that it can also be disquieting.

He is a member of the Associació d’Escriptors en Llengua Catalana (AELC – Association of Catalan Language Writers).