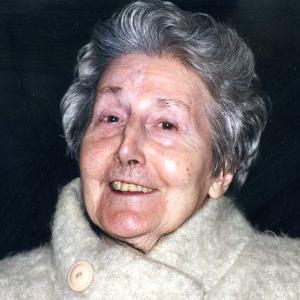 Felícia Fuster (Barcelona, 1921 - París, 2012) is a poet, painter and translator. She is a singular voice in contemporary Catalan literature, perhaps because her work became known relatively late (in the 1980s) and because, since she has been living in Paris since the 1950s, she has remained outside the Catalan literary world. Known for her strong personality and defining herself as femina faber, she is also notable for her love of freedom in all areas of her life, as can be seen in both her literary work and her paintings.

Fuster writes from the standpoint of existential introspection and with a high degree of rigour and formal experimentation. Solitude and self-affirmation, however, appear in a style of writing that is open to everyone and that does not shrink from social commitment. The experimental side of her work brings her close to vanguard forms and also the Japanese tradition, along literary lines that appeared in Catalonia in the 1920s and 1930s.

As a writer who has not been influenced by the laws of the literary market, Felicia Fuster has been much appreciated since the publication of her first collection of poems Una cançó per a ningú i Trenta diàlegs inútils (Song for No One and Thirty Pointless Dialogues) as an original and mature voice in Catalan literature. A daring, unique, irreplaceable woman's voice.