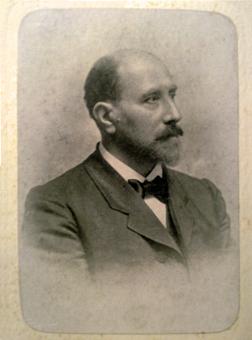 At 22 years old he wrote his first novel, Julita (1874), which is his most significant work, and is considered on of the great novels of Catalan romanticism, as well as a peculiar work in the context of the novels of his time. Until the early twentieth century he published regularly, and one could highlight titles such as Sota un tarot (1876), La Mercè de Bellamata (1878), L'Espalmada (1889), La reineta del Cadí (1892); and the volumes Novel·les (1882) and Novel·les vigatanes (1904). He collaborated on the magazines and reviews La Renaixensa, La Ilustració Catalana, La Veu de Catalunya, and from Vic, La Veu de Montserrat and La Gazeta Vigatana. He participated in several editions of the Jocs Florals de Barcelona (Barcelona's Floral Games), achieving great success both with his poems, which have the typical Floral Game's style, and his prose. His poetry appeared partially collected in the volumes Poesies (1916), Guspires de ma llar (1919), and at the collective anthlogy La garba muntanyesa (1879).

Throughout his life he was very active in the cultural life of his city. He participated in the foundation of the "Esbart de Vic" (1867), he was a member of the "Círcol literari", and from 1878 he worked both as a pharmacist and as a writer, as well as a lecturer at the Physiology and Natural history department of Vic's secondary school.