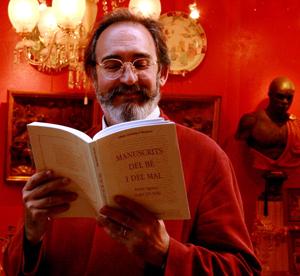 Sergi Jover (Barcelona, 1950-2022). Writer, member of the comittee for the Institució Catalana de Genealogia i Heràldica and member of the ACEC.

He spent his adolescence with his family in Switzerland, which enabled him to become fluent in French and to discover the works of Sartre, Cèline, Verlaine, Verhaeren, Brel and Brassens, among others. At the end of the 1960s he returned to Barcelona where he would meet the leading Catalan poets of the day, for example Salvador Espriu, Pere Quart, Tomàs Garcés and Joan Vinyoli, after which he began to write his own poetry. In 1999 he published his first book of poems Vida meva (My Life), which was followed some years later by Ressenya (Review, 2001) and Neu fosa (Melted Snow, 2001).

Besides writing poetry and working in the domains of theatre and drawing, he also translates. He has co-translated a history of the Third International by Miloš Hájek as well as The Joke by Milan Kundera, and other works.

He was a member of the Association of Catalan Language Writers, of PEN Club and of the Ateneu Barcelonès.