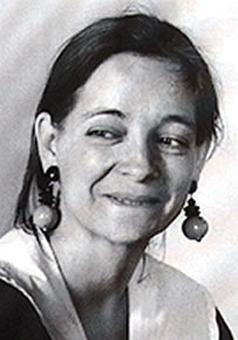 Maria Mercè Marçal (Barcelona, 1952-1998) was a poet, translator and novelist. Though, by chance, she was born in Barcelona, she always considered that she was from Ivars d’Urgell (Pla d’Urgell region), the town where she grew up. She obtained a degree in Classical Philology and was Professor of Catalan Language and Literature. Her work became known in 1977 with the collection of poems Cau de llunes (Lair of Moons), winner of the 1976 Carles Riba Prize. She subsequently published several collections of poems, the last of which, Desglaç (Thaw), brings together the works she wrote between 1984 and 1988. She also published the novel La passió segons Renée Vivien (Passion According to Renée Vivien), winner of the 1994 Carlemany Prize, which also received further critics awards. As a translator, she contributed Catalan versions of works of Colette, Yourcenar and Leonor Fini.

In 1973 she was co-founder of the publishing house Llibres del Mall. Apart from being an active participant in Catalan literary circles, she was also politically active and engaged in social movements as a feminist, and she retained these commitments until the end of her life. Some Catalan musicians have sung and set her poems to music, for example Marina Rossell, Ramon Muntaner, Teresa Rebull, Celdoni Fonoll and Maria del Mar Bonet.

She was a member of Associació d'Escriptors en Llengua Catalana (Association of Catalan Language Writers).