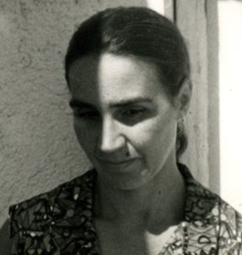 Maria Oleart Font (Barcelona, 1929 – Alella, 1996) was a poet and fiction writer. Her work was wide-ranging and heterogeneous, including poetry, short stories and children's books, some of which have not been published. Her poetry, however, has ensured that she has been recognised as one of the most significant voices in modern women's poetry. Her writing is steeped in Nature, imagination and passion, in both tragic and celebratory senses. Her awareness of gender issues is one of the key points in her work, as is clear in her book Versos a Anaïs (Verses to Anaïs, 1989).

Oleart was active in Catalan public life and cultural and literary associations and she was awarded a number of literary prizes (from Jocs Florals prizes to prizes awarded by the Institut Català de la Dona – Catalan Women's Institute). She was on the board of AELC (Association of Catalan Language Writers) from 1981 to 1983.