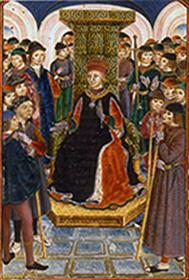 Related to the court of Alfons el Magnànim, he wrote trobadour courtly love poems and collaborated with other poets such as Andreu Febrer or the Castilian Íñigo de Mendoza. Influenced by the great XII C. trobadours, he used the lexical and verbal provençal resources, but on a basis that was already eminently Catalan. From his work, only 18 poems have survived to this day, but they were sufficient to consider him as one of the greatests lyrical authors in Catalan before Ausiàs March.

His poetry has been edited in several occasions, but one could emphasise Les poesies de Jordi de Sant Jordi, cavaller valencià del segle XV, edited in València by Tres i Quatre, with studies by Martí de Riquer and Lola Badia, and Poesies, edited in Barcelona by Barcino, with studies by Aniello Fratta. His work has been translated into Spanish and Italian.