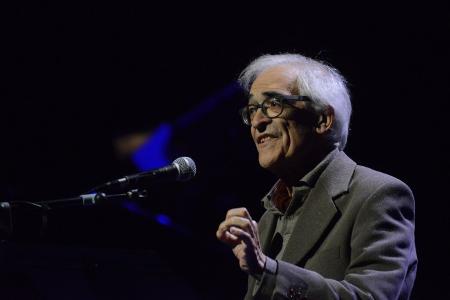 Lluís Solà i Sala (Vic, 1940) is a poet and playwright. He published his first book Laves, escumes (Lavas, Froths) in 1975. He works in the review Inquietud as an editor and, as director, is one of the prime movers of the poetry review Reduccions. His poetic work has been recognised in recent years and, in particular De veu en veu (From Voice to Voice), which contains poems he wrote between 1960 and 1990 and which received the Quima Jaume Prize in recognition of poetic creation, and the Critics’ Prize for Catalan Poetry. It was followed by L’arbre constant (The Constant Tree, 2003), a collection of six books of poems alternating verse and poetic prose; the anthology Entre bellesa i dolor: Obra poètica inèdita (2010) and the volume Al llindar de l'ara (2010). In 2013 Solà published the essay on Catalan poetry La paraula i el món. In 2016 Edicions de 1984 published his Complete poetic works, which include several unpublished poetic volumes and received the Cavall Verd Josep M. Llompart poetry proze from AELC. In 2017, the same publishing house published his prose compilation Llibertat i sentit. Reflexions sobre la condició humana (1999-2016).

As a dramatist, Lluís Solà has brought to the stage works by Strinburg, Aeschylus and Brossa, inter alia and has also premiered his own works. He is director and founder of the Osona Dramatic Centre. He has translated the works of Kafka, Dürrenmatt, Handke, Rilke, Rimbaud, Pound and Pessoa, while also writing critical studies of the works of Vinyoli, Beckett and Miquel Martí i Pol.

His work in the civic field should also be noted with regard to his constant efforts to obtain official recognition of the Catalan language.