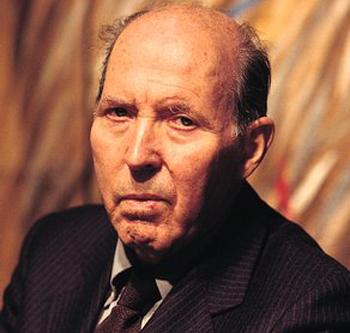 Joan Triadú (Ribes de Freser, 1921 - Barcelona, 2010) was one of the most outstanding twentieth-century Catalan literary critics. At an early age he devoted himself to studying classical languages and structuring Catalan literature after the trauma and dispersion caused by the Spanish Civil War. Studies like Antologia de poesia catalana 1900-1950 (1951) and Antologia de contistes catalans (1951), together with the later works La novel·la catalana de postguerra (1982) and La poesia catalana de postguerra (1985), have been essential instruments in making known the Catalan literature of the post-war years. Also notable besides these titles in Triadú’s extensive literary career are the essay La ciutat dels llibres (1999) and the diary Dies de memòria 1938-1940. Diari d’un mestre adolescent (2001), which is an essential testimony for understanding the tremendous human devastation of those unjust years.

A poet, translator, and teacher of critics and essayists, Joan Triadú produced a body of work that is rich in nuances and experiences which, far from being exclusively literary in intent, was also culturally militant in seeking to make literature more accessible in society. His work as a founder of magazines and literary initiatives, writer of articles, and expounder of the character of Catalonia, was recognised in the form of such awards as the Creu de Sant Jordi (St George Cross, 1982), the Jaume I Award of Honour (1982), the Catalan Letters Award of Honour (1992), and the Gold Medal of the Generalitat (Government) of Catalonia (2001), among many others. In 2001 he was awarded the Serra d’Or Critics’ Prize for Biography and Memoirs.

A member of the Institute for Catalan Studies, and honorary member of the Associació d’Escriptors en Llengua Catalana (Association of Catalan Language Writers – AELC), he was the author of works that have earned a privileged place in Catalan literature.