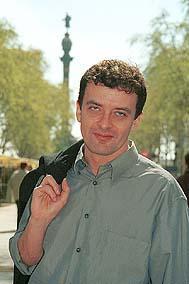 Alfred Bosch (Barcelona, 1961), is a writer, politician and university professor.

Alfred Bosch's texts move between literary creation, academic essay and journalism, without establishing clear frontiers between genres and disciplines. He spent some years visiting the world's conflict areas and produced a wide-ranging repertoire of articles for the press. Africa, the part of the world in which he believes that joys and suffering are most intense, is very present as the backdrop to his books Nelson Mandela, l'últim home-déu (Nelson Mandela, the Last of the Titans, 1995), La via Africana (The African Way, 1998) and El Imperio que nunca existió (The Empire That Never Was, 2001). With Europa sense embuts (No-nonsense Europe, 2002), he offers a singular, frank vision of European society through the impressions offered by Africans with whom he spoke. Alfred Bosch is a lecturer in African History at the Pompeu Fabra University of Barcelona.

His first novel, L'atles furtiu (Furtive Atlas, 1998) received the prestigious Sant Jordi (Saint George) Prize, which established his reputation as a writer among literary critics and readers alike. He had previously published the short-story collections Cronicalia (1986) and Herois d'Azània (Heroes of Azania 1996) but it was after L'atles furtiu that his literary career really took off. He has subsequently written Àlia la sublime (Alia the Sublime, 2000), L'avi, confessions íntimes de Francesc Macià (Grandfather, Intimate Confessions of Francesc Macià, 2001) and an epic trilogy: 1714, Set de rei (1714, Thirst for Royalty); 1714, sota la pell del diable (1714, Under the Devil’s Skin); and 1714, Toc de vespres (1714, Call to Vespers – 2002). With Les set aromes del món (The Seven Aromas of the World), Alfred Bosch received another prestigious award: the Ramon Llull Prize. Most of his books are firmly-grounded, historically speaking but, to a great extent, they are also adventure, suspense and travel stories. He mainly writes in Catalan, and some of his books have been translated into several languages.