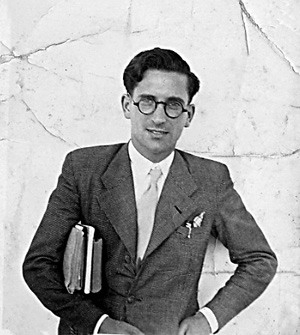 Pere Capellà (Algaida, Mallorca, 1907 - Palma 1954) was a literary commentator and poet and was particularly well-known as a playwright and teacher.

He wrote his plays in the 1940s and 1950s when, despite the difficult political situation, he was still able to present his ethical and political ideas on-stage in colloquial, modern language, which would come to represent the starting point for a new concept of theatre in Mallorca. Some of his best-known works are L'Amo de son Magraner (The Owner of Pomegranate House, 1949), Sa Madona du es maneig (Madona Takes Over, 1950), El carrer de les tres roses (Three Roses Street, 1952) and El rei Pepet (King Pepet, 1954), all of which were widely acclaimed.

Before this, however, Pere Capellà had channelled his vocation and literary concerns into poetry, for example his Cançons republicanes (Republican Songs, 1931), and also journalistic articles that were published in newspapers and reviews like Baleares and La voz de Porreras, and that reflected his political views, even though the atmosphere at the time was hardly conducive to them. Pere Capellà will be remembered as a convinced republican and a man who was committed to his times, his language and his people.