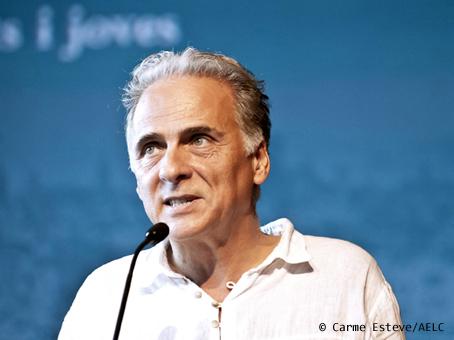 Returning from hospital the same day
they took you in—blooming, you and the lime-tree both—
you slept on, tucked in your own bed at home
in the balmy light of early evening.
Behind that pale forehead, smooth as a child's,
I sense you struggling with the anaesthetic,
bad dreams in your fluttering eyelids
and in that small hand stealing across your stomach . . .
That dream, perhaps, amongst other dreams, where some god
carries me off on a swan with silver wings,
to have me pouring him a golden cup
of the wine I had been saving for you.
As though you didn’t want to wake
to a world of pain within, evil without.

They smash down, waves of stone
on the unmoving reefs of water
sending up a cloud of stone
splinters that hides paths written on water.
Emerging from the abyss of stone
is the old dragon dozing in his scales of water
to subject the kingdom to the rule of stone
by building its foundations in the land of water.
Suddenly, out of the wild olive rises the wind
that binds kingdom and dragon to the sun
and sends to all four quarters its hosts of wind
to flatten the parasol, the sun-
less places. And at the gospel cry of the wind,
stone, water and wind together worship the sun.

Keep adding sevens, you'll sniff infinity,
where the line grows indistinct between two blues;
finger by finger the skeleton crumbles,
where memory is wrecked between two rivers;
century after century the planets wear away
to re-unite where particles converge;
pit by pit pyrites is dissolving
to soar back up in great parabolas.
Neither the cooing of death's dove, inside
your chest, nor any number of blows
against his cage of bone
can stifle the wild, animal cry
that flays the root and fills the wave with salt
when, back from beyond, the first birds arrive.

I take you pathways where no agaves grow,
through the wood where only the badger treads,
up to the windswept crag (your Mont Ventour)
where ancient beacons now are heaps of ash;
I teach you, along the path, our fathers' tongue,
while sage and thyme springup with every word,
as though you weren't the master, I your pupil,
but your unvanquished spirit had made us peers.
Just so that from those heights you'll see it rise—
a shoot growing out of a rotting stump,
a tender sapling out of a scorched terrace—
that word of blood spreading just like a tree,
towards one minute's blossoming in the sun,
a marble tree upon the monument.

for Anna Crowe and Kate Pattullo

I come from light that's scarcely to be borne,
that shines and leaves the land all scorched and bare,
to light that's just a meagre flame; forlorn,
fingering motes of dust upon the air.
Stepping out from thickest undergrowth,
smelling the sea's tangle of kelp and brine,
I beg whoever led me this same path
tightly to lash me to a sturdy pine:
lying in hundreds on a shoal of sand,
the seals pour out their voices and intone
a darkly-strung polyphony of the land
that wind will hoard for its own use alone.
At the thin line where green to grey is lent,
struggling, I listen to the north lament.

The Wedding of the Pencil and the Rubber

A drawing-pencil, sharp and dapper,
and his true love, an indiarubber,
resolved to wed and hold a beano,
the like the town had never seen-o.

He chose to wear the strangest cap:
it looked just like a floury bap;
and she a strawberry-coloured shoe
in which she stuck, as fast as glue.

He drew a sumptuous wedding-feast,
champagne and canapés on toast;
but she rubbed out the soup-tureen
to make room for an aubergine.

And when he'd drawn the orchestra,
he was both baton and conductor;
but she erased the bass-trombone,
abhoring its funereal tone.

And when night fell, and bed was sought,
he found he'd drawn the thing too short,
so made it stretch to meet his want,
as folks must do when things are scant.

She, in a gown of white shantung,
could find no room to park her bum,
and so rubbed out a certain wedge,
to let her dangle o’er the edge.

That night he dreamed a castle grim,
in which the king looked just like him;
while she erased the palace fair,
the blue prince fading into air.

Translated from the Catalan by Anna Crowe ©