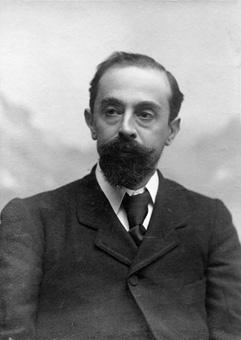 Joan Maragall i Gorina (Barcelona, 1860-1911) was best known as a poet but he was also a translator and the author of essays of ideological, cultural and political interest.

With his origins in the romantic tradition and participant in the modernist movement, his theory of the "living word" in poetry had not only an aesthetic but also a human sense, since he understood the fact of poetry as a natural manifestation and not an elitist one, something close to society and capable of influencing it. His poetic production contains poems as different as Cant Espiritual (Spiritual Song),El cant de la senyera(Song of the Catalan Flag), La vaca cega (The Blind Cow), La sardana, Oda a Espanya (Ode to Spain) and El compte Arnau(Count Arnau). His translations of Goethe, Novalis, Pindar, Homer and Nietzsche are outstanding. At the time of the Tragic Week crisis in Barcelona in 1909, and almost the only intellectual to do so, he responded with articles such as Ah, Barcelona..., La ciutat de perdó (The City of Forgiveness) and L'església cremada (The Burned Church), insisting that, in some measure, the Catalan bourgeoisie were responsible. In 1904, he was proclaimed "Mestre en Gai Saber" (Master in the Art of Poetry), and he was a founding member of the Philological Section of the Institut d'Estudis Catalans (Institute of Catalan Studies).