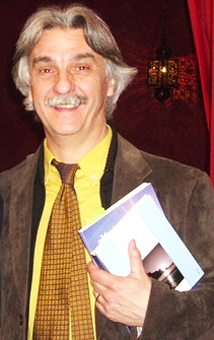 Eduard Miró i Saladrigas (Barcelona, 1959), who has a degree in Catalan Philology, is a teacher and head of the Col·legi-Acadèmia Miró in Barcelona.

He is a "Mestre en Gai Saber", the most prestigious honorary title of the Jocs Florals literary competition, president of the Perpignan Jocs Florals, and has also won the Jocs Florals "Medalla de la Vila" and the Generalitat (Catalan Government) Prize. After the 1980s he began to receive awards for his poetry and songs in Perpignan and in many parts of Catalonia including Llinars del Vallès, El Clot, and Sant Martí. Together with his students he has been involved, to the present day, in the Jocs Culturals (Cultural Games) of Sant Martí, the Espurna Prize of El Clot, Rosa Prize of Sant Martí and of Barcelona, Jocs Florals in schools, and the Cultural Weeks of the Maresme Neighbourhood Association. In 1988, he received two History of Catalonia First Prizes, the Teachers' Poetry and Theatre for Children Prize of the School Activity Section of the Catalan Congress for Culture, this being awarded by the President of the Generalitat (Government) of Catalonia, in the Saló Sant Jordi (St George Hall). He received further awards in 1988 in Sant Cugat, in 1995 in Igualada, in 2002 in Alella, in 2003 in Calella and in 2006-2007 the Recitation Prize in Igualada. Since 1995 he has been taking part in the Alella Town Council’s poetry activities and, since 1997, has organised poetry and musical recitals, as well as intercultural and intergenerational events in honour of Pau Casals and the Universal Declaration of Human Rights in the Besòs Civic Centre and the "Aliança" of Poblenou. He has also organised other recitals, for example the "Testos per Textos" (Heads for Texts) in the four neighbourhoods of the Sant Martí District of Barcelona, where he has also worked with the "Mostra de Poesia Comparada" (Comparative Poetry Show) since its inception. He gave three recitals at the Universal Forum of Cultures (Barcelona 2004). Moreover, he organised the Barcelona Poetry Week at the Diagonal-Mar branch of FNAC, in the La Farinera Cultural Centre and the Centre Moral in Poblenou. He also works with Poesia en Acció (Poetry in Action).

He has the title Senescal del Capítol Nobiliari dels Homes de Paratge (Seneschal of the Noble Chapter of Men of Lineage of the Principality of Catalonia). Since 2006 he has presented the Jocs Florals in Les Corts. In 2009 he was awarded the Medal of the European Forum 2001. The same year he started a poetry programme on Mataró Ràdio. In 2011 he was one of the two stars in the film Entre 2 gegants, una cultura que es nega a morir (Between Two Giants: A Culture that Refuses to Die). Josep Meseguer and Salvador Pané have set his poems to music. For the last thirty years he has been engaged in educational initiatives to foster a love for poetry and fiction among his students. In 1989 he published an adapted version of a children’s Bible in Catalan. He has also written a play about the life of Pau Casals. In 1997 and 2004 he published and then reissued Perfum de Silenci (Perfume of Silence, La Busca), in a trilingual edition with a CD. In 1999 he published Homenatge poètic a Pau Casals (Poetic Homage to Pau Casals) and, in 2011, the collection of poems Morir d’Amor a Tavertet, al capvespre (To Die of Love in Tavertet, at Nightfall), which includes a CD of the poems sung by the author. Eduard Miró i Saladrigas is a member of the organizing committee of "Projecte Àgatha", which supports people affected by autism. He has edited the book Autisme. Trenquem el silenci amb la poesia (Autism: Let Us Break the Silence with Poetry, Viena Ed., 2014).

He has been awarded the Barcelona Medal of Honour for his work as a teacher, in the fields of poetry and music, as a rhapsodist, and cultural activist.