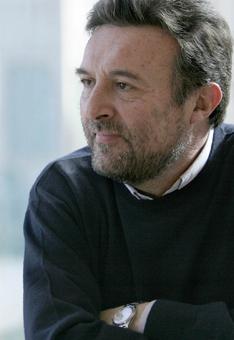 Josep Palomero (Borriana, 1953) is a writer and linguist.

Graduated in Hispanic philology at the Universitat Autònoma de Barcelona (1976), and PhD by the Universitat Jaume I de Castelló with the thesis «Estudi biogràfic i literari d’Artur Perucho Badia. Comunicació i societat en la primera meitat del segle X». He worked in the fields of education (as a secondary school Language and Literature teacher) and of culture and politics (as a Borriana town councillor and director of Cultural Services of the Valencia City Council). Again, he is vice-president of Acadèmia Valenciana de la Llengua, because of his work in the linguistic domain.

His early teaching experience has given him knowledge and experience in the world of education, which he conveys in a large number of studies and text books on language and literature. He has written books for small children and also adaptations, besides publishing translations of children’s literature.

Josep Palomero a well known writer of both poetry and novels and has received prizes for his work in both genres. He defines his style as “baroque”, while the delicate and carefully embellished prose of his stories swathes his descriptions of characters and historical periods in such a way that his highly original stylistic formula suggests a different way of writing and reading the historical novel. His books Els secrets de Meissen (The Secrets of Meissen, 1994) and El tatuatge dels apàtrides (The Tattooing of the Stateless, 1997) are his re-creations of episodes from the end of the eighteenth and nineteenth centuries respectively, in particular from the standpoint of the aristocratic and royal circles of the times. The carefully researched smells, sensations of touch, emotions and thoughts he offers, and the integrated mosaic of his narrative offer a unique opening into recondite areas of the past. These two highly-regarded novels are emblematic of the production of Josep Palomero, who is deemed to be one of the most outstanding writers in Valencia’s literary circles today.

He is a member of the Acadèmia Valenciana de la Llengua [Valencian Academy for Language]. In 2005-06 he took part in the Experts Committee that studied the usage of the Coofficial Languages of Spain in the General Administration of the State (which was a project of the Public Administration Ministry of the Spanish Government). In 2006 he was a member of the High Level Group on Multilingualism, at the European Community.

He is a member of Associació d'Escriptors en Llengua Catalana (AELC ,Association of Catalan language Writers).